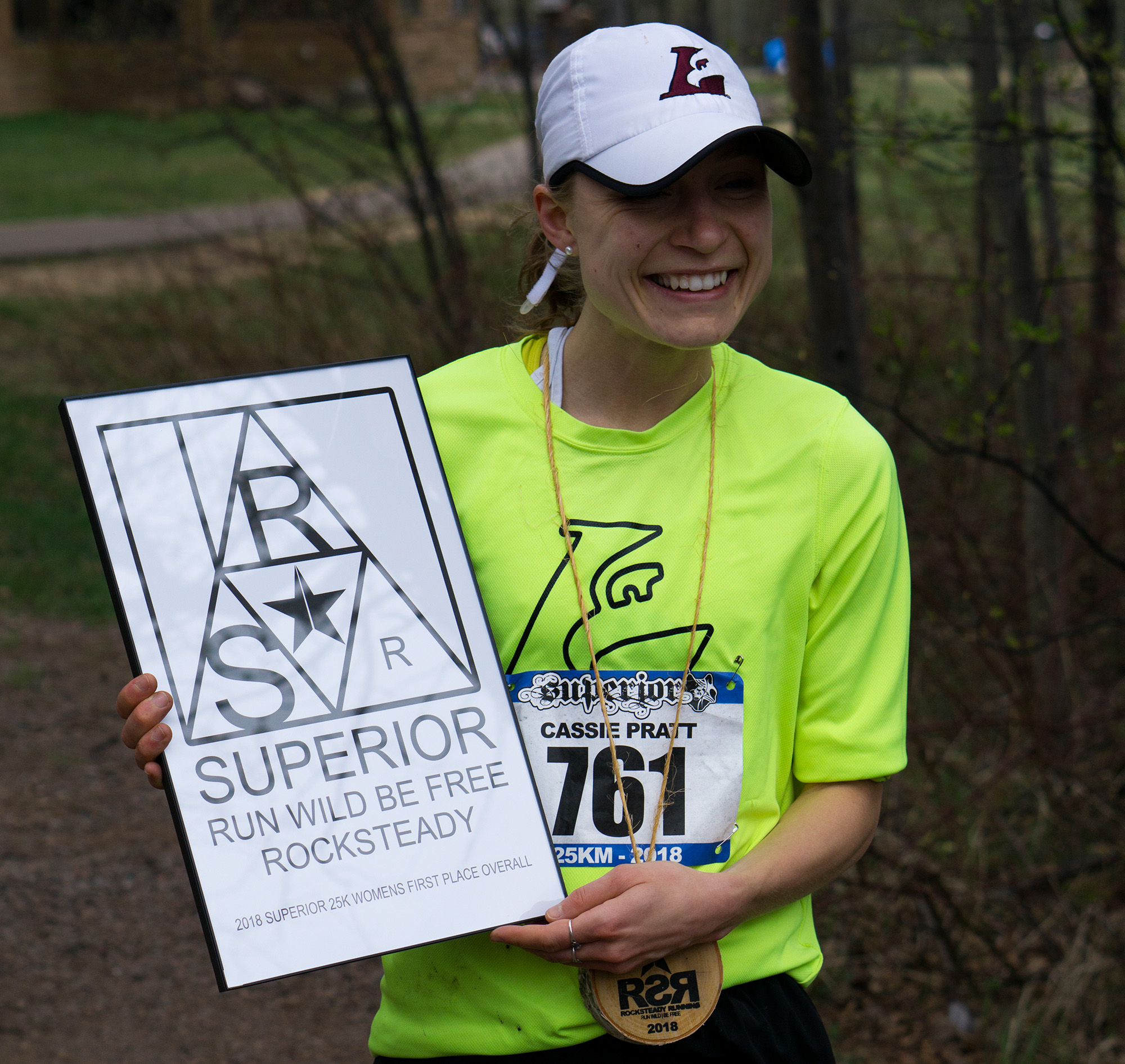 CP: This was my first time running the Superior 25k, and I would easily run it again. The course was beautiful, and just the right amount of challenging terrain. I hadn’t been on this course before, so every obstacle was a surprise to me, which made pacing tricky. I knew going into the race that I wanted to be the first female finisher. From the beginning I had a feeling people would spread out and I might be running alone, but I didn’t know if I could keep up 25k with the first place male and I didn’t want to hang back for the next group. I did run mostly by myself, occasionally seeing some of the guys in front of me, but on the way back I was amazed by the support from the remaining 25k runners! Near the end I overestimated the distance to the finish line and felt that it snuck up on me before I had a chance to see if I had an end-kick in me. I’m very happy with how it all turned out!

KL: Your Ultrasignup page says this is only your second trail run (also a 3rd place finish at Afton 25k last year), but you’re not new to running. Tell us a bit about your history and your move to trails?


CP: I ran the Hixon 25k in La Crosse, WI a couple years ago and that was the first trail race that hooked me. I’ve always enjoyed running, but not always competing. I ran for UW-La Crosse, but afterwards realized that the trails along with longer distance races were more of my style. I started training with Jake Hegge and I have been a part of Trail Transformation ever since. While I’d like to say that I would’ve eventually found my way to trail running, it was really the community in La Crosse and the trail system that caught my attention. The group of people you find off-road running have a huge sense of adventure and a way of sucking you into the trail culture!

KL: Is there any pressure, living in LaCrosse, to win the race if you show up at Superior? Seriously, aside from a great and challenging trail system, is there something about that town that fosters fast runners?

CP: While La Crosse has quite a lot of fast runners, and access to a vast trail system, I felt no pressure when arriving at the Superior 25k. Everyone on the trails in La Crosse has been so inviting and rather than solely focusing on the competition aspect, there is more emphasis on the thrill of trail running and being out there together. Jake Hegge, Michael Borst, and Tyler Heinz have done an amazing job building a strong, trail-loving community in the La Crosse area!

CP: Aside from running, to prepare for Superior I took on the weight room this winter. Approaching technical uphills and downhills requires so much more strength than a regular paved pathed path and weight lifting has given me the confidence to run the obstacles that are inevitable in trail running. I think just putting time on the trails is key, and when I’m not running I am usually hiking on them!

CP: Do you have any upcoming trail races planned? I do have a couple in mind, but nothing set in stone. I would love to use trail running as a means of vacationing in the future! Many of my bucket list destinations would be 10x better via trail running (and racing)!