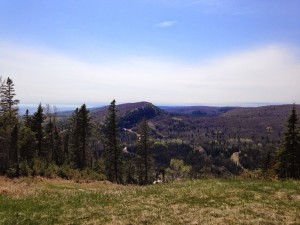 There’s no place quite like the North Shore.  A tune-up for longer summer races, or a goal race all its own for those stoic enough to brave the winter, the Superior Spring Trail 50K and 25K feature some of the state’s most beautiful and challenging terrain. Take it all in, if you don’t mind falling on your face.

The races are also wedged into that perfect Northern Minnesota weather window, where it’s nice enough, but not too hot, and – most importantly – the horse flies aren’t out. It’s been muddy before, but when you’re also collecting your first crippling sunburn of the year, who cares? I’m possibly the grouchiest 20-something this side of the Mississippi, and even I took to splashing through the puddles last year.

If Zumbro kicks us off each year in standard sloppy – possibly snowy – spring weather, Spring Superior marks the point where trail-running season is in full swing.

Race Preview…Preview
As the sun rises, a few things are certain with this race:

• My synopsis of the men’s and women’s competition will prove inaccurate as the race plays out;

• Someone will be angry at having been left out of that synopsis;

• They and several others will be offended by the existence of such a synopsis;

• And the Earth will continue to rotate on its axis. Er, depending who we elect president in the fall.

50K Preview
This is a genuinely exciting race on the men’s side, as it will yet again pit young gun Michael Borst (23, La Crosse, WI) against recently-minted master’s ace Chris Lundstrom (40, Minneapolis). They’ve met twice at the Afton 50K, with Lundstrom winning both contests but being pushed to a big course record in 2013, with Borst also going under the old mark. Lundo won this race every year from 2009 to 2013, and Borst has never run it (though he has twice finished second at the fall 100-miler). At what point will spry, vigorous youth trump hardened experience?

Duluth’s Mike Ward and Lakeville’s Jared Eckstrom could mount dark-horse challenges – and overall, the men’s field is deep, with stalwarts like Adam Schwartz-Lowe and Bob Gerenz and Nordic skiing savant Grant Cook sitting a ways down the super-scientific ultrasignup.com rankings – but unless either Lundo or Borst drops out, I have to believe that’s your top two.

The women’s race is a bit more sparse – of 245 registered entrants, only 68 are female. But Duluth’s Kristin Rognerud, 35, was third in the 50-miler on these trails last fall and second in this race last spring; Jodi Zeleznikar (43, Esko) has finished third and eighth in the 25K; and Hannah Stoughton (27, Minneapolis) was seventh in 2013 at the competitive Mount Mitchell Challenge 40-miler in North Carolina.

For the men, this race might also be fairly cut-and-dry. With no Ben Kampf to threaten, and assuming he has recovered from his 3:49:56 runner-up performance at the Chippewa 50K, Adam Doe (28, Maple Grove)’s stiffest competition might be from Gordon. (And before you go to the comments section, I’m saying that because she’s fast, not because any of the other men are slow. I’ve dueled Katie McGregor in enough 5Ks to never, ever doubt those Team USA Minnesota women.)

The Social Media Race
We already covered this, but Mill City in a landslide. Just be sure to look up from your phones while you’re running, at least occasionally.

Loudest Runner
With Minneapolis’ Charlie Murray taking a rare absence from the 50K, this title is up for grabs.

Most Heavily-Sponsored Athlete
Brett Busacker, third at last year’s 50K, is an ambassador for Fitsok, Hammer Nutrition, TC Running Co, and – based on his blog’s widgets – the chiro clinic Well Adjusted Minneapolis. Anyone have five? (Update: we’re told Brett may not be in attendance.)

Most Insufferable Wannabe Writer Not Running This Year
Yeah, yeah, I know.

Did you make it this far? Congratulations. You shall be rewarded with some far more interesting human interest storylines!
What really makes a trail race are the swaths of people running it – wherever they place in the race itself – and the spirit, experiences, and community they bring to an otherwise nondescript execution of simultaneous physical activity.

This race, whose participants represent 15 states and Canada, means something different to everyone running it: it’s someone’s first ultra; someone’s hopeful first finish; someone’s potential PR at the distance; someone’s early-season fitness test, a tune-up for a 50- or 100-miler later in the summer. Everyone’s story is different, every time, which is why writing about this stuff never gets old.

Per Race Director John Storkamp – whose story is pretty extraordinary itself, if you haven’t heard it – here are some of the storylines that will make this, as every trail event, more than just a race:

Most Finishes
At the moment, Minnesota ultra stalwart Maria Barton has the most finishes at the Superior 50K, with nine. She could be joined this year by Steve Hagedorn, of Two Harbors, who will be attempting to finish his ninth as well.

Local Pride
It’s always fun when a local Mayor comes down to see what all the fuss is about and gets a little muddy in the process (think R.T. Rybak skiing the Loppet every year). Up in Grand Marais, Mayor Jay Aerosmith Decoux is prepping for his second Superior 50K. It’s hard to think of a better showcase of the North Shore’s natural beauty than this race, though Decoux already knows it through and through.

Starting Them Early
Kevin Chem might have finished the Zumbro 100 earlier this spring at age 17, but that’s geriatric compared to Sarah Schmidt-Dannert, 16, who will be taking on the 50K. When I was 16, I dreaded the 11-mile long run we peaked at during cross-country. Not to be outdone, 12-year-old Ethan Owata, son of regular Rocksteady race runner and volunteer Timothy Owata, is running the 25K.

The Gunhilds
But running is easy when you’re young. Or so I’ve found, so far. (I’m 29, and feeling quite a bit older than 22, which doesn’t bode well for 35, 40, etc.) But David Huberty, 72, makes it look easy – he’ll be going for his eighth 25K finish. Over in the 50K, Harry Sloan, 67, will be running it for the first time. But this will be small potatoes compared to his finish at last year’s Superior 100 – a race he just so happened to found in its original form, back during ultrarunning’s terrible twos.

We thank everyone that entered the 2022 Superior Spring Trail Race 12.5KM, 25KM and 50KM lottery. The lottery drawing for the May 2022 event took place in accordance with our lottery protocol and procedures. Complete 2022 lottery drawing information can be found HERE https://www.superiorspringtrailrace.com/2022-lottery-selection/

You have Successfully Subscribed!