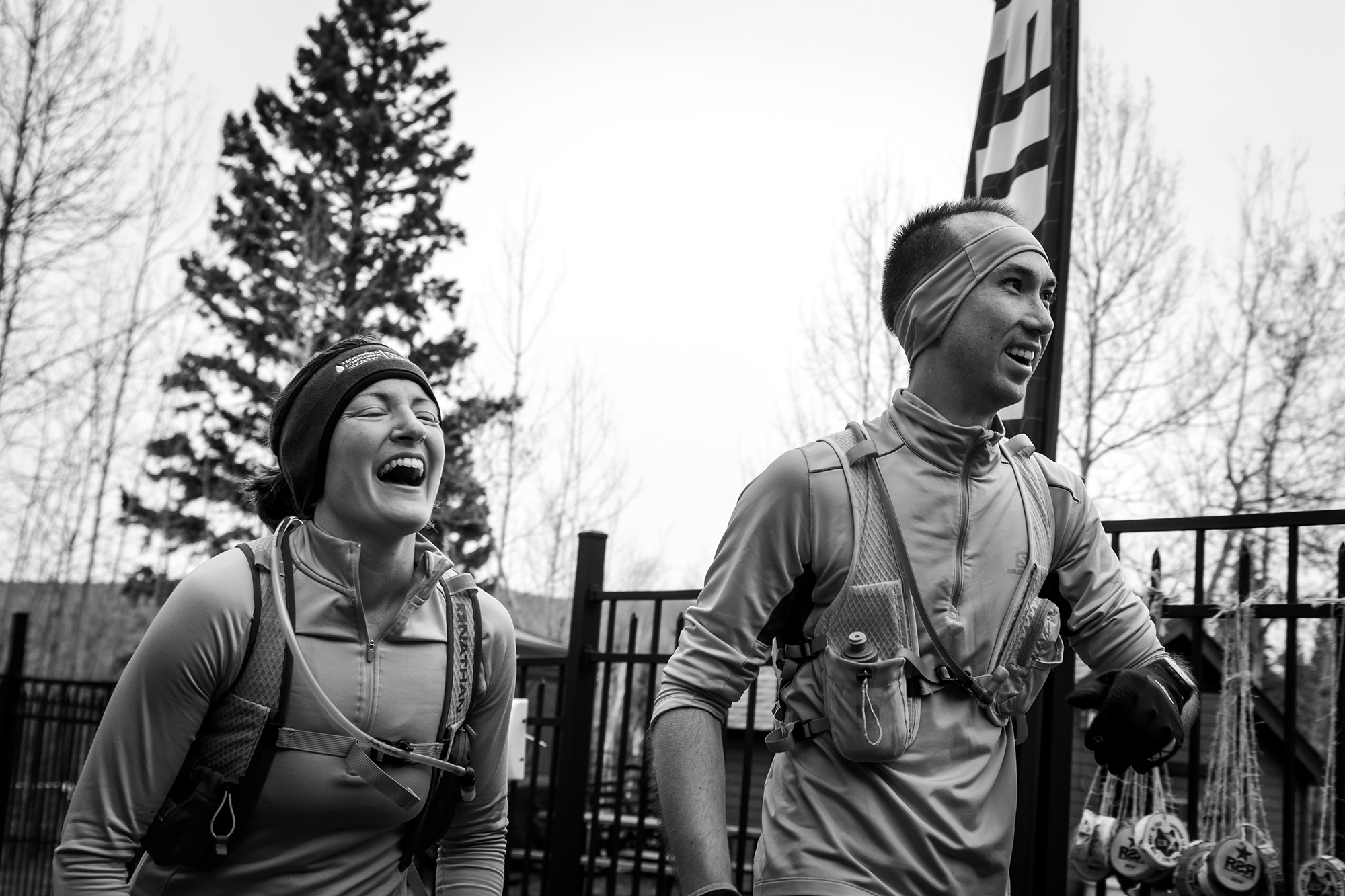 After each year’s race I write a recap, often times blending factual and statistical information from race weekend with the emotional and even the metaphysical – the aspects of running that I personally find the most interesting. This time, I could not get the blend just right, so, you get two parts. The “Facts” and the “Feels”. I hope you enjoy it. Race Director, John Storkamp

Part One: The Facts.

Race day greeted us with tempestuous monochrome skies. It kind of felt like you were in a black and white movie. Black and white except for our superhero trail runners multi-color packs and shoes and tops and smiles breaking through the grey monotany, echoing the mood of the weekend – runners, excitedly ready to explore their favorite place on their favorite trails, regardless of conditions. Conversely, our couple of advance days of race prep were performed in glorious short-sleeve sun and warmth – welcome to the North Shore where regardless of what weather you might prefer, you are going to get what the North Shore gives you, when it wants to give it to you, and it usually gives a lot. Temperatures were in the mid-30’s to low-40’s, shivering bodies huddled on the start line ready to move. I was heartened to see lots of rain and wind shells either worn or tucked in packs and belts, an indication of no novice field. It actually rained pretty hard down at lake elevation during the race, 37 and hard rain, a trail/ultra RD’s daymare, but just up the hill where the trail is and where the race is run, we mostly saw sleet vs rain-drops – a bullet sufficiently dodged. Sawbill Aid Station and Carlton Peak are just high enough that they saw some big fluffy snow-globe-like snow-flakes – May 18 snowflakes. Leading into the race, Spring in the Northland had been characterized by heavy snowpack and persisting late season snowstorms. Storms that dropped a near foot of snow on April 29 and another 6 to 9 inches (depending where on the shore you were and at what elevation) on May 9. These storms led to the low-lying wetland portions of the trail being as wet and muddy as ever. Upland trails however were discovered to be in really good / well-drained shape – the leaves even crunching underfoot for the first runners through. The trails ultimately proved to be in good enough shape for some really solid times to be run and there were only a few DNF’s. Keeping on-trend for this 2019, Sunday (the day after the race) Duluth, to the South of Lutsen (where the races are held), got almost three inches of new snow, many participants who were heading South / back home from the race had to deal with some terrible driving conditions – for those not keeping track, we are talking about May 19 here. 160 event-weekend volunteers made the race possible as they always do – we owe these awesome individuals a debt of gratitude. As always, complete results, records and photos can be found on our website. Here are a few additional stats:
50K – Registered: 259, Started: 204 (79%), DNF: 12, Finished: 192 (94.1%)
25K – Registered: 399, Started: 324 (81%), DNF: 2, Finished: 322 (99.4%)
12.5K – Registered: 326, Started: 270 (83%), DNF: 0, Finished: 270 (100.0%)
Total – Registered: 984, Started: 798 (81%), DNF: 14, Finished: 784 (98.2%)

Part Two: The Feels.
I take away something different from each year’s race. Yes, there is the running and the competition for sure – certainly not to be discounted. But more-so, on race weekend, I’ll notice something, or sense something and when significant enough, it will play on a loop in my mind, throughout race weekend and after. This is what has been on repeat for me this year: That regardless of race, gender, sexual orientation, age, body type, pace or distance that you prefer to run – everyone is welcome at the Superior Trail Race, by Rocksteady Running, and on the trail. We celebrate and we seek diversity, we celebrate what makes you, you – better yet we celebrate what makes us, collectively us. This is our culture, these are our values, and they should echo throughout our community – so let it echo throughout this year’s race recap. With so much divisiveness and division in the world, the trail is where we can all come together in harmonious singleness of purpose, no matter who you are, no matter where you come from. For me, as I experienced race weekend, this became the theme and the lens through which I experienced it all… and quite simply, it was beautiful. Here is just a sampling, of the tapestry that is US:

A super positive, charismatic, gay black man, running in his underwear won the 50K race – Coree Woltering joined us again after his fourth place Superior 100 mile finish last fall, this time to take the Spring 50K title. Coree, please keep coming back, we love everything about you, you bring the magic my friend. Matthew Eidenschink, a soft-spoken medical student takes second place not far behind – where you find time to train while in medical school is beyond me. Matthew has volunteered with us before and keeps reminding me that he will be volunteering for years to come – we can always use more high-level medical support, so this as you can imagine, this is music to my ears. Gretchen Mesta is a Type 1 diabetic who relies heavily on her faith when it comes to running and in all aspects of her life. That faith and fierce determination allows her to do things like win the Superior 100-mile title as she did in 2017 – she now adds a Superior Spring 50K title to her story – a story that certainly goes so much deeper than running alone. Oft RSR volunteer and longtime friend Maria Barton finishes her 12th Superior 50K, she has also finished the 25K twice in years past – finishing the Tahoe 200 in 2018 has not seemed to take any of the shine off of her. I have taken to calling Maria the King of the Superior Spring Trail Race. My old friend and one of Gene Curnow’s long-time training partners (you know, there is a local trail marathon named after him) Kathy Weix became the oldest ever finisher of the Superior 50K at the age of 70, we would love to see her do the same at the Superior 100, I believe that she is one of few 70 years old that can do it. Kathy is a shining example of perseverance to other trail and ultra-women for sure – and to all of us. Finishing not far behind Kathy, Jack VerSteegh, also 70, accomplishes the same incredible feat on the same incredible day, just wow. Seven-time 25KM finisher Anna Lahti takes the women’s title in that race, Anna is a staple in the Duluth running scene. On the men’s side Nathan Swenson has a stellar race, good for the win and the seventh all-time fastest Superior 25K ever run – I don’t know much about him besides that much of what he has run in the trail / ultra-world, he has won – I’ll put him on my “meet at least two new people” list for next year. By the way, how did you do on that? In the 12.5K, five women no less go under the previous course record, Rena Viehbeck of Thunder Bay Ontario Canada gets the win. 70% of the 12.5K field was women – which is exactly 100% badass. On the men’s side, Marco Salmen wins by just a minute – I wonder if second place Derek Savela could see him on that monster last climb. Burgess Eberhardt becomes the oldest ever finisher of any of the Superior Trail Races (both Spring and Fall), he is 77 – Burgess and his buddies not only run trails, they work on trails and they have a great time doing it together. Chase Karas, the youngest son of one of our longtime friends and volunteers (we remember when he was born) ties as the youngest ever finisher of any of the Superior Trail Races (both Spring and Fall) at the age of 8, last year Sonya Shyrshova also 8, finished the 12.5K. The Kwe-Pack, an indigenous women’s running group who train, race and inspire together have made the Superior Spring Trail Race part of their running tradition. They were well represented this year over all Superior Spring Trail Race distances by at least a dozen runners. And speaking of how they inspire… their fathers, sons, brothers, husbands and boyfriends are joining the Kwe on the trails at an ever-increasing rate. I was stoked to see Thomas running his first 25K and equally stoked to get to talk skating, ecology and spirituality with him and Nashay after the wife and husband duo finished together.

This is just a dozen or so of 100’s of unique stories that unfolded on race weekend. Our friend and author Kevin Langton is working on some interviews that dive a little more deeply into a few of these amazing stories. The indomitable Amy Clark is putting together a piece for print in UltraRunning magazine. We will post this recap on Facebook, we hope you will take a minute to share your story with us in the comments – we would love to hear it and learn more about the unique, diverse and wonderful you.

We thank everyone that entered the 2022 Superior Spring Trail Race 12.5KM, 25KM and 50KM lottery. The lottery drawing for the May 2022 event took place in accordance with our lottery protocol and procedures. Complete 2022 lottery drawing information can be found HERE https://www.superiorspringtrailrace.com/2022-lottery-selection/

You have Successfully Subscribed!