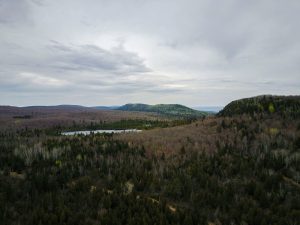 Stories. All trail runners love to tell stories. It’s a foregone conclusion that when you start talking trails with another runner, you’re going to hear about some incredible experience that they’ve had, and you’re going to be anxious to share your own. We love to talk about what we’ve seen out on the trails, because being out on the trails changes us as people. On the trail we learn to deal with who we are in our heads, and persevere through pain and adversity. I’ve often felt that the best trail stories aren’t from those who crush the course and stand on the podium, but from those back-of-the-pack runners who struggle through every footstep to get one more step closer to their goal.

The story of Spring Superior 2017 starts, as all stories in Minnesota do, with the weather. Spring along the North Shore of Minnesota can be a grab bag of rain, snow, heat, wind and cold. Every runner meticulously checks the forecast for days, trying to get a glimpse of how to best dress. For 2017, Minnesota decided to give us cool temps with a breeze. An overcast sky kept the sun from baking runners who were out all afternoon (as happened in 2016). With high temps in the 40s, it ended up being the perfect weather for running through the woods. The biggest threat was the impending rain, which fortunately held off until late in the evening when everything had been packed up.

Spring Superior is also often a story of mud. Every 2015 Spring Superior runner will happily share with you the story of how far up their legs the mud went. The warm, dry temps of 2016 meant that we all received a respite from our earthly exfoliation, but this year, the mud returned. It was impossible to avoid getting dirty. As I stood taking pictures of runners deftly moving across Mystery Mountain, I reminded them that every mud bath is bragging rights to their friends back home.

Despite some mud, the cool weather fueled some amazing times. Ben Cogger returned after a year away to reclaim his title as the 50K male champion. Although there was a battle for first place early in the race, Ben pulled away and crushed the course record with an impressive 3:45:28. On the women’s side, Emily Gordon (former 25K record holder) made her Superior 50K debut with another course-record-shattering time of 4:30:32.

In the 25K race, newcomer Matthew Berens took home the prize for the men with a time of 1:45:56, having led right from the start. Returning 2014 women’s champion Emma Spoon crushed the aforementioned 25K course record with a solid 2:00:26. Ben, Emily, Matthew and Emma will have tons of stories to share about their amazing accomplishments in the weeks to come. All of them embodied the perseverance and determination that is required to conquer the rugged Sawtooth Mountains, and to set the bar even higher for those that will come after them.

One of the truths about stories is that they all come to an end. Our lives are a story of the things that we’ve done and accomplished, and the relationships that we’ve built. Trail running is about a community that comes together to share and experience our stories together. This year, the story of Spring Superior will forever be linked with the end of the story for a beloved Minnesota trail runner. Veteran Spring Superior 25K runner Jon Mathson collapsed on the trail between Moose and Mystery Mountains. The community of runners around him lept into action, and soon he was surrounded by experienced nurses and first responders. Jon passed away on this trail that he knew and loved.

As the story of what happened spread throughout the race village, people continued to do their jobs, albeit with heavy hearts. Although the community was shocked and saddened, everyone took comfort that no one at Spring Superior is ever alone, no matter your position in the standings. As a community of trail runners, we stand together to mourn the loss of our friend and to help support his family.

We don’t like to link our memories of places with bad events. Yet, we know that we will all return next year, and run with passion and love for the trail and the world that surrounds it. We will carry the story of 2017 Spring Superior with us into the future, knowing that our shared narrative brings us into a community of amazing people, amazing places, and more stories yet to come.